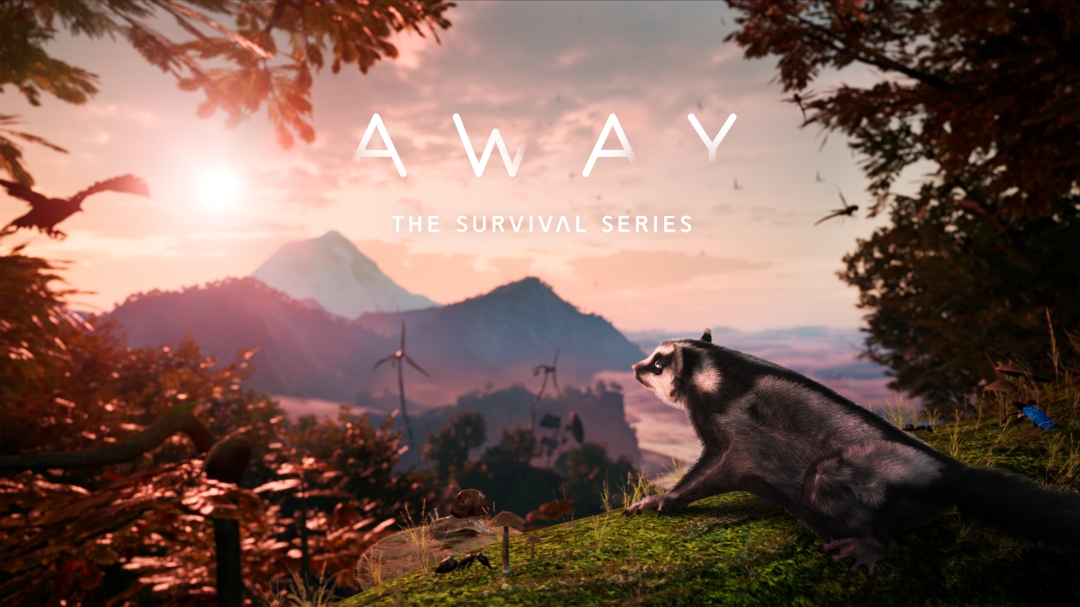 AWAY: The Survival Series Review (PC/Steam)

Who doesn’t love a good nature documentary? These insightful programs delight the viewer with a combination of gorgeous cinematography, detailed footage, descriptive narration, and the opportunity to enter the intricate lives of animal species that might otherwise be overlooked. I grew up watching nature documentaries, particularly those featuring the iconic voice of Sir David Attenborough, arguably the most renowned and respected natural historian on Planet Earth. I’m sure many of you reading this too have fond memories of the many incredible documentaries featuring his distinct narration.

Likely you’ve heard of some popular videogames where the player is given the opportunity to enter the lives of animals. There are games where the player must protect their vulnerable family, like Shelter for example, experiences that offer the opportunity to see through an animal’s eyes in virtual reality like Eagle Flight, and even the dystopian future of Tokyo Jungle where urban metropolises are overrun by rabid animals.

But have you ever experienced a game that provides a true cinematic nature documentary experience? Well, that’s exactly what AWAY: The Survival Series hopes to achieve. Developed by Breaking Walls Studio, an independent developer from Montreal, AWAY throws the player into a harsh distant future where the earth has been ravaged by natural disasters. In the midst of a world full of danger is a family of Sugar Gliders, fighting against the odds for one goal: survival. Can you help this tiny family survive against all odds?

Ravaged by a cataclysm of natural disasters, Planet Earth in the distant future has become a harsh, inhospitable environment for many species. Devastating storms have made most areas inhabitable, with humans fleeing entirely and allowing animals to reclaim the environment for their own. Though life itself is a challenge for many – predators reign supreme in this new world, scattered throughout the vibrant rainforest laying in ambush for their next victim.

And yet, defying all odds, a family of adorable Sugar Gliders push onward during a torrential downpour. However, the smallest of animals are often the most vulnerable. Torn apart from its mother who in a split second is snatched by the talons of a mighty eagle, the young glider must learn to fend for itself, navigate the harsh environment, and reunite its family in order to survive.

At its core, AWAY is a 3D platformer, with the player navigating each environment by leaping from trees, dashing between cover, or swiftly gliding through the sky. What appears on the surface to be an open world is instead disguised as series of linear locations with platforming obstacles and numerous deadly predators. There are also some elements of other genres thrown into the mix, such as occasional stealth sections, or challenges that focus on combat, but simply navigating to the next location is predominantly the glider’s main goal.

Typically, 3D platformers must have tight, precise controls that allow the player to perform tricky manoeuvres to test their skills. Unfortunately, this is where AWAY falls short. Playing as a glider, the controls are understandably floaty, with gliding being a key component to the platforming. Movement on the ground is simple, controlling like any other game, but once climbing a tree or taking to the skies the controls become problematic. The lock-on jumping scheme feels imprecise, with jumps occasionally launching in wrong directions, and the camera often going haywire at inconvenient moments. This becomes most noticeable during the game’s frustrating combat, where locking-on and pressing the attack button can send the camera spinning around dizzyingly.

There are luckily multiple segments of the game that are satisfying and enjoyable, especially when the controls don’t cause any hinderance. Gliding through the air from tree-to-tree is enjoyable and a creative way to cross otherwise harsh terrain. The use of vertical space too is impressive, with almost every object offering an opportunity to climb and observe the area from above. Exploring each lush environment from the treetops or high up on a cliff face can be a joy when surrounded by the game’s natural life awash with vivid colour.

One of the major appeals of a nature documentary is capturing stunning, detailed footage that allows the viewer to observe incredible scenes of animal life. AWAY manages to replicate some elements of this, creating an intricate world bursting with life. With graphical settings pushed to the maximum (also referred to as “Documentary Mode”), the game has the potential to look spectacular at certain moments.

The rich lighting that washes through trees and peers across the horizon gives many areas a pink/gold glow that look wallpaper-worthy. Here are some screenshots I took during my time with the game:

In contrast, there are many aspects of AWAY that are rough around the edges and detract from the overall visual appeal. Animal models will often appear raised and poorly-positioned when standing on uneven terrain, animations can be rigid and jittery, and some cutscenes that are supposed to be tense or emotive moments become awkward due to poor attention-to-detail. Much improvement is needed before AWAY can capture the incredible atmosphere of a nature documentary, and thankfully the developers have already provided some updates that improve the experience.

Narration is an important component of any gripping nature documentary, with voiceovers like the great Sir David Attenborough becoming synonymous with the genre. This is exactly the experience that AWAY aims to emulate, featuring an unseen narrator who describes many of the glider’s actions. This initially seems quite entertaining, offering insightful comments into the animals and their habitats. Unfortunately, narration quickly becomes tedious, as many lines are repeated constantly in response to certain actions. For example, falling into a body of water harms the glider and drains its health, and in each instance the narrator says the glider must search for food, which feels completely out of context.

However, the game does manage to achieve a true feel of a nature documentary through its soundtrack, composed by Mike Raznick. While you might not recognise him by name, chances are you’ve heard his music at some point, as he is responsible for games like Ratchet and Clank (PS4), OddWorld New ‘n Tasty, and even the incredibly popular nature documentary TV series, Life. The soundtrack created for AWAY evokes a feeling much like the documentaries off which the series is based, with an impressive orchestral score that ranges from soft and emotive to fast-paced and tense. Here’s one of the game’s lovely orchestral tracks:

Outside of the main story, which spans a few hours, the game also includes a completely optional “Exploration Mode” that offers a completely different experience. This mode lets players venture into the entire world of AWAY, with the ability to possess and control almost all animal species in the game. Jumping into tiny lizards and scurrying across the forest floor, and then buzzing through the air as a swift dragonfly is amusing and enjoyable for a brief moment. The main aim is to find rare animal species that are spread across the entire area – aside from this there is really no other objective. Admittedly it’s a great opportunity to take screenshots like those I shared earlier, but otherwise it feels somewhat lacking. The developers have since announced that the Exploration Mode is considered a beta for the time being.

So is AWAY: The Survival Series the definitive nature-based videogame that would impress the likes of even David Attenborough himself? Not quite. There are sadly many details of AWAY that feel unpolished and detract from what could have otherwise been an insightful and engaging adventure. Its lush and detailed world is unfortunately marred by poorly-responsive controls, troublesome platforming, and a camera that spoils the intent of being a cinematic adventure. If these flaws can be overlooked, the detailed world and its myriad creatures offer entertainment that aims to delight players like myself who grew up engrossed by watching nature on the screen.

So, why should you play it?

But why shouldn’t you play it?

A review copy on PC was provided by the publisher for the purpose of this review.